Blue light : a growing problem in the digital age

In the digital age, we overconsume images. For example, 50% of people surf on the internet while watching a video program. Especially nowadays, most television programs are accessible from any screen. However, the electronic devices we access today mostly contain LED backlight technology. This technology helps to improve brightness and clarity but emits very strong light waves that are increasingly exposing us to the dangers of blue light. This is why ophthalmologists are looking into this increasingly important issue to better understand this phenomenon and find solutions.

What is blue light ? 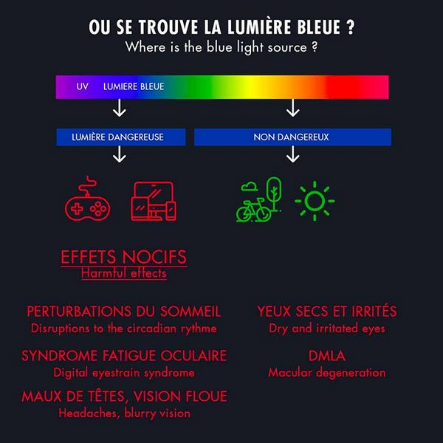 From 380 to 500 nm. This is where the wavelengths of blue light lie. This light is emitted by the sun but also by artificial light sources or fluorescent lights contained in most digital screens such as computers, tablets, smartphones, or TV screens.

Part of this light is beneficial for our body : it is turquoise light. Indeed, the latter acts as a regulator of waking and sleeping phases. We call it the circadian cycle. It also makes us more responsive and contributes to our well-being and good mood. This is why it is possible to enter in a cycle of seasonal depression in winter, because we lack light at this time of the year. And, it is these light rays that contribute to our balance and shape.

How does it act ?

This light consists of turquoise lights, as said before, and blue-purple lights. The lens of the eye filters one part while the other part penetrates deep into the eye and reaches the central part of the retina that manages 90% of the visual information received by our eye. Among other things, blue light strikes the retina with more power than other types of light.

What is the danger of blue light ?

In the blue light, the dangerous part is the blue-violet part which is between 415 and 455 nm. Indeed, if we are exposed to this light for too long, this can, in the long term, cause harmful damage to the eye. For example, it can damage the retina, which can lead to AMD (age-related macular degeneration) or even blindness.
Added to this, being overexposed to this light, the production of melatonin, hormone usually secreted at the end of the day to promote sleep, decreases, which will disrupt the sleep cycles.
This fact was confirmed by a study published in Professor Paul Gringas’ journal In Frontiers Public Heart, as part of a research competition at King’s College London and the University of Surrey.

Since blue light is omnipresent in our lives, it’s hard to avoid it. Thus, devices have emerged to protect us from the harmful effects it can cause. This is particularly the case of anti-blue light glasses that promise the filtering of problematic wavelengths. In reality they attenuate them by about 20%. But they have proven their effectiveness in terms of eye tiredness reduction.

In 2016, Apple adds the new Night Shift option to iOS 9.3. Samsung and Huawei also equip their devices with this feature, sometimes called “eye comfort”. The latter is less tiring for the eyes than the conventional display and can, in some cases, reduce headaches, according to some testimonies. But looking at something disturbing on your smartphone just before you sleep can affect the quality of your sleep.

In order to truly test the effectiveness of this mode, at first glance, revolutionary, we decided to perform tests. Using the GoSpectro : an handheld spectrometer, we compared the spectra of lights of a recent Samsung smartphone, the Huawei mate 10 lite smartphone and an HP laptop. In the classic mode and with the filter option anti- blue light. What emerges from this experience is that the filter decreases the amount of blue light emitted.
For example, after a quick calculation, we see that on the Samsung smartphone, there is a reduction of 25% of the blue light thanks to the filter. On the other hand, on the laptop, we notice that all the wavelengths decrease. Which amounts to reducing the brightness of its screen. We performed a second verification test. 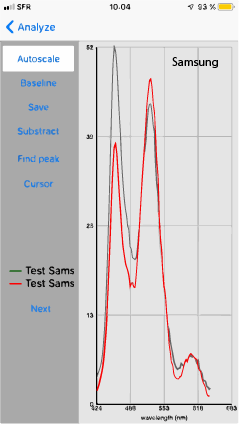 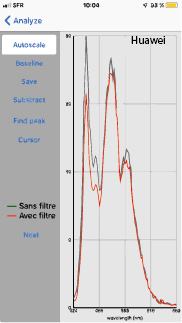 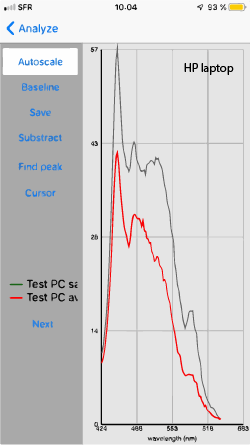 Figure 1 : Blue light filter test on Samsung and Huawei smartphones and on a HP laptop with an handheld spectrometer GoSpectro

We can (Figure 2) that when we decrease the brightness of the HP notebook screen, the amount of blue light decreases. However, the turquoise light is also affected while it is beneficial. 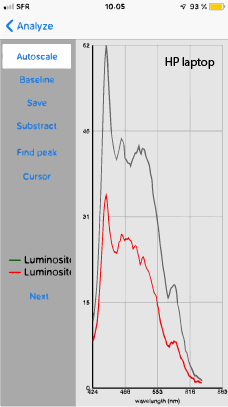 Figure 2 : Test of the different brightness levels of an HP computer with an handheld spectrometer GoSpectro

Thus, even if several devices have been invented to mitigate the harmful effects of blue light, none is totally effective. This is particularly the case of anti-blue light glasses that only mainly attenuate the problematic wavelengths. At the same time, our experiments have shown that options like the Night Shift on iOS or the anti-blue light filter on Android reduce the amount of blue light. Emitted retaining the beneficials effects of other lights and in some cases avoid headache. While this type of filter, on the laptotp tested, decreases all wavelengths emitted, including those beneficial, such as when we simply decrease the brightness. If some of these devices have some benefits, they can not be as effective as turning off your device two hours before going to bed. This, in order to preserve its quality of sleep.

People who spend a lot of time on screens, it means most of us, expect other more effective solutions. This is an issue that ophthalmologists continue to look at. That will, in the future years be effectively solved or at least, we hope…

Article and experiments realised by GoyaLab